Keeping Warm (and Healthy) In Winter

With wintry winds, frigid temps and dark skies creeping in earlier and earlier, it’s no wonder most folks choose to stay inside and do little more than watch TV and munch on snack foods. But there are healthier — and warmer — ways to cope with the cold. One way is to exercise! 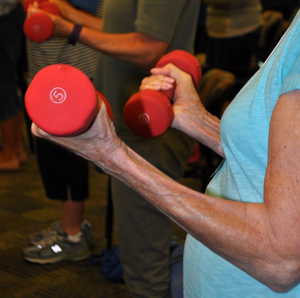 For some, exercise inspires groans. But consider this: physical activity is anything that gets your body moving. It doesn’t have to be expensive or added on to your “to-do” list. Just move enough to get your heart rate up for at least 10 minutes at a time. That’s the type of activity that counts toward meeting the physical activity guidelines. Many household chores can count as physical activity.

Soup made healthy — reduce the sodium
Eating hearty comfort foods is another way to stay warm during these colder months. Foods, like soups, pastas and stews are often hotter and heavier, which naturally warm people. But they’re also often loaded with simple carbohydrates, excess sodium and fatty ingredients.

A one-cup serving of a popular brand of lobster bisque has 380 calories, 27 grams of total fat, 16 grams of saturated fat, and 1,240 milligrams of sodium. New England clam chowder can contain up to 940 calories, 65 grams of total fat, and 34 grams of saturated fat per one-cup serving. It is better to choose tomato-based or broth-based soups, like vegetable or minestrone. Enjoy soup as an appetizer or with a salad or a whole-wheat roll. Choose low-sodium canned soup, because regular soup usually contains a lot of salt and preservatives.

One of the best ways to lower high blood pressure is to reduce the salt (or sodium) that you eat. That means doing more than putting away the salt shaker. About three-fourths of the sodium in the U.S. diet is from processed and restaurant foods.

The only way to know how much sodium is in a packaged food is to read the Nutrition Facts on the back label. Also, become aware of the terms that you may see on the front label. Below is the definition of what each claim means:

(Makes 2 servings, each 1 1/3 cups)
For variation, substitute some of the potato with carrots, broccoli or cauliflower in this low sodium, fat-free soup.

Directions
1. In a covered non-stick saucepan, gently boil vegetables and spices in water for 10 minutes, or until potatoes are tender. Remove from heat.
2. In a blender or with an electric mixer, blend milk and cornstarch. Add half of the soup mixture. Blend until almost smooth. Return blended mixture to saucepan.
3. Boil gently for 2 to 3 minutes until mixture thickens, stirring constantly. Serve hot.
4. Cover and refrigerate leftovers within 2 hours.