Do Not Cook Dry Beans in Your Slow Cooker 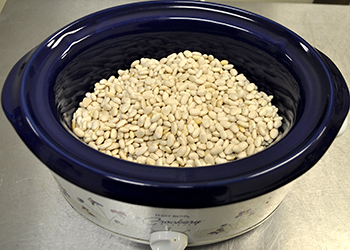 The slow cooker is a staple tool at my house especially during these wintry months. It’s low and slow, cook-it-all-day technique makes it a perfect vessel for turning tough ingredients into tender deliciousness. But research now suggests that one tough ingredient shouldn’t be cooked in the slow cooker at all — beans.

All beans contain a compound called “phytohaemagglutinin,” also called PHA, or kidney bean lectin. Lectin is a type of protein that performs many functions in both plants and animals. But some types of lectin, including this one, can be toxic at high levels.

If this lectin isn’t destroyed by thorough cooking, you’ll be sorry. According to the U.S. Food and Drug Administration’s Bad Bug Book, eating as few as four or five improperly cooked red kidney beans can cause severe vomiting within a few hours, followed by diarrhea. Other symptoms include serious abdominal pain.

Although some cases have required hospitalization, people normally feel better within three to four hours after symptoms start. That’s one reason why there aren’t many recorded cases of this particular foodborne illness in the U.S.: People usually begin to get over the illness just about the time they might think of contacting their doctor.