Apple Varieties: A Guide for Taste and Cooking 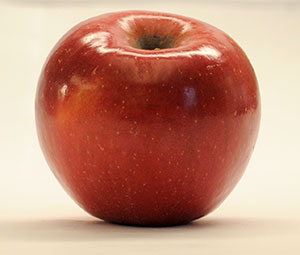 An apple a day… but which variety?

For many, the flavor of fall belongs to the ubiquitous pumpkin. But for me, fall is all about the apple, which is my first favorite fruit.

I can still remember regularly sharing an apple with my dad when I was a little girl. He had false teeth which made it difficult to bite down through the skin, so he had this unique way of trimming the apple with a knife, one bite at a time, and I would sit beside him and he would offer every other slice to me.

To this day, I can’t eat an apple without thinking about him. Back then, I only believed there was one type of apple, the red delicious, which I still love today. But there are 100 varieties of apples sold in the US, and they all vary in taste and suggested use; some are good for eating but terrible for cooking and vice versa. It can be overwhelming! 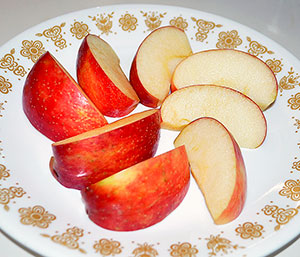 Common apple varieties
The following is a list from usapple.org and gives a nice breakdown of the popular varieties’ flavor profiles and applications.

Use: Perfect for snacks, salads, and baking

Braeburn
The Braeburn originated in New Zealand in the early 1950s. It was a chance seedling, with Lady Hamilton and Granny Smith as possible parents. Its color varies from orange to red over a yellow background. A crisp, juicy apple, the Braeburn has a rich, spicy-sweet flavor. Now grown in the United States, U.S. Braeburns are available beginning in October through July.

Use: Braeburn is a multipurpose apple good for all types of apple uses.

Cameo
Discovered as a chance seedling in a Washington State Red Delicious orchard about 30 years ago, the Cameo is now available in supermarkets nationwide. With bright red stripes on an orange background, it actually has a brighter, more lemony flavor than its Red Delicious cousin. Available late fall through early spring.

Use: Firm, sweet and a favorite apples for slicing up and serving as a snack.

Cortland
Founded more than 120 years ago by horticulturalists in New York State, Cortland has a yellow-green skin with lots of red and even bluish accents. You’ll mainly find this apple in the East and Midwest in the fall through early winter.

Use: Beautiful and tart, it’s a tender apple that browns slower than most when sliced, so it’s a “smart” choice for serving up as a snack or in a salad.

Crispin
The original name for this exceptional apple was Mutsu, reflecting its Japanese heritage. It was renamed Crispin in the late 1960s and has been gaining fans ever since. Available almost year round.

Use: Sweet, refreshing and super crisp, these apples are excellent for eating, baking, freezing, or cooking into sauce. They are also good for salads and pies.

Empire
Empires premiered in 1966 in the Empire State of New York. They are a cross between Red Delicious and McIntosh developed by the New York State Agricultural Experiment Station. Stake out your Empire between September and July.

Use: This crisp, juicy apple has a delightful sweet-tart flavor and creamy white flesh, making it a good all-purpose apple.

Fuji
Originally developed in Japan in the late 1930s and named after the famous Mt. Fuji, U.S.-grown Fujis began appearing in markets in the 1980s. Fuji is a cross between Ralls Janet and Red Delicious. This variety´s popularity is skyrocketing, thanks to its sweet flavor and firmness. Fuji apples are bi-colored, typically striped with yellow and red. They are available year round, beginning in September.

Gala
This variety, a cross between Kidd’s Orange Red and Golden Delicious, originated in New Zealand. The Royal Gala strain was named in honor of Queen Elizabeth II, who deemed it her favorite during a visit to New Zealand. It was brought to the United States in the early 1970s and is now one of the country’s most popular apples. Galas can vary in color, from cream to red- and yellow-striped. U.S.-grown Galas are harvested beginning in mid-July and are typically available year round.

Use: Crisp, juicy, and very sweet, Gala is ideal for snacking.

Golden Delicious
Yellow with an occasional pink blush, Golden Delicious is “Apple Lite.” It's loved by those who prefer a mild, sweet flavor. There’s nothing tart about this apple…just a buttery, honey taste to please.

Use: Great for baking into apple pies and crisps mixed with more tart apples like Granny Smiths. It makes for a great flavor combo that tickles all your taste buds, all year round.

Granny Smith
This Australian native was discovered in 1868 as a chance seedling by “Granny” Anne Smith of Ryde, New South Wales. One parent might have been a French crabapple. Grannies are known for their distinctive green flesh, which sometimes bears a red blush, and their very tart flavor. U.S. Grannies are harvested beginning in August and are available year round.

Use: An all-purpose apple, Grannies work equally well as a snack or in pies and sauce.

Honeycrisp
This honey of an apple has a honeyed, mild flavor and a crispness deemed explosive. Juicy and sweet, this popular newcomer is a cross between a Macoun and a Honeygold. Honeycrisp’s skin is a distinctive mottled red over a yellow background, with coarse flesh. Honeycrisp is “college educated,” developed by the University of Minnesota. Supplies are limited but growing with harvest beginning in September.

Use: This apple is good for snacking, salads and sauce-making and stores well.

Jazz
Like its namesake music, Jazz is mellow with a bit of everything working together perfectly. Medium sized and scarlet red, with yellow-green patches, it’s sweet like the Honeycrisp and nice and firm like the Pink Lady. Available year-round.

Use: Jazz smell delicious and is refreshingly juicy. It is great for snacking and baking.

Use: With a yellow-green base skin color and a red-orange blush, it is excellent both for eating fresh and for cooking.

Macoun
Some pronounce it Mah-coun, others say Mah-coon, and a few swear by Mah-cowan. Whichever you choose, you’re a winner. Dark red with a purple flush, tender and tart – with tough skin that gives way to a crunchy, white, juicy flesh. Available in the fall.

Use: Great for snacking, and sweet enough for making apple cider and even applesauce.

McIntosh
This old, well-known variety was discovered as a chance seedling by John McIntosh in 1811. Its deep-red finish sometimes carries a green blush. Juicy, tangy, tart McIntosh has a tender, white flesh. It is best used for snacking and applesauce, but some people enjoy its tart flavor in pies as well. This apple is typically available from September through May.

Use: McIntosh cooks down easily; if pie making, cut slices thick or add a thickener.

Paula Red
With a red blush over a yellow-green background, Paula Reds are a charming combination of sweet and tart. The Paula Red comes by way of Michigan and is one of the earliest apples to arrive during harvest season. You may even find them as early as August!

Use: Ideal for snacking and making applesauce.

Red Delicious
The most widely recognized of all U.S. apple varieties originated in Iowa in the 1870s. This sweet, crispy, juicy apple varies in color from striped red to solid midnight red. Western Red Delicious are elongated in shape, with pronounced “feet.” Eastern-grown Delicious are more round.

Use: This apple is best eaten fresh or in salads.