For some reason, cold days inspire a desire to bake. Even myself, who admittedly is not a skilled baker, will trifle through the dessert sections of cookbooks looking for something scrumptiously sweet and oven-baked. This led me to ponder about certain ingredients that are the key leavening agents used in baked goods; baking soda, baking powder and cream of tartar. 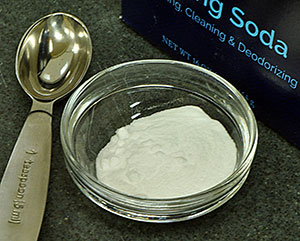 Chemically known as sodium bicarbonate, baking soda is a type of salt that’s made by mixing carbon, sodium, hydrogen and oxygen molecules. It’s used to chemically leaven doughs and batters when it is mixed with an acid. Combining baking soda with an acid produces a chemical reaction that releases carbon dioxide gas which causes the food to expand and become fluffy. Think about light and airy pancakes. That’s the baking soda at work. On the other hand, if you have dense rocks for pancakes, then your baking soda might not be working.

This technique is different than using yeast to leaven bread because yeast is a biological process since it’s a living organism that produces the carbon dioxide gas from eating various carbohydrates found in the batter. Yeast are alive. Baking soda is not. But both cause products to rise by producing carbon dioxide gas, just in different ways.

And because baking soda is not a living organism, it’s pretty shelf stable for quite some time. It does not have to be refrigerated. In fact, baking soda used for cooking shouldn’t be kept it in the refrigerator because it will absorb orders lingering in that environment. Now, this is a great use for baking soda, but just don’t use that baking soda for baking and cooking anything.

Baking soda is often labeled with a best by date of 18 to 24 months, but you can always test its effectivity by mixing 1 1/2 teaspoons of baking soda in a bowl with 1 tablespoon of vinegar. It is still usable if it fizzes.

Keep in mind, baking soda becomes reactive when it’s exposed to acids (buttermilk, vinegar) and must be used right away otherwise the carbon dioxide-producing bubbles will begin to pop and result in a flat and dense product rather than something light and airy. So, it’s probably not a good idea to make and hold a batter for a long time. It’s better to use it right away (or at least within the hour) especially once the baking soda and acidic ingredient has been combined. Protecting those bubbles is also why you’ll want to mix batters lightly. Vigorous mixing will cause bubbles to break. 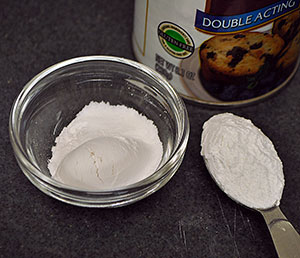 This ingredient is a mixture of baking soda and powdered acids. It’s usually found in recipes that do not call for additional acids because it already contains acid. Like baking soda, it makes products rise by producing carbon dioxide gas; however, it does so in two phases. First, the baking soda in the powder along with one of the acids starts producing carbon dioxide bubbles when they’re mixed with wet ingredients. The second rising phase happens when the other powdery acid reacts with the remaining baking soda producing more bubbles when exposed to heat over 170°F. This two phase rising method is known as double-acting. There are single-acting baking powders available; these powders only rise once during the heating stage of baking. Your recipe will specifically call for single-acting baking powder if needed. Most baking powders are commonly double-acting.

Like baking soda, you can test it to see if it’s still effective. Put one teaspoon of baking powder in a small bowl and mix in one tablespoon of warm water. If the baking powder doesn’t fizz when wet, it’s no longer active and should be thrown out.

Also, like baking soda, baking powder is usually dated with a “best by” range of 18 to 24 months, but it will last indefinitely if it does not become contaminated. Contamination happens when the same measuring spoon is used to measure other ingredients before it’s used to measure the baking powder. 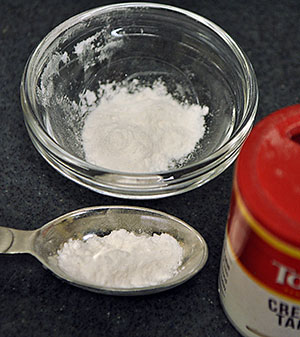 It’s not a cream, not does it bear any relation to the tartar one hears about during dental visits.  So, what is it?  It’s actually a byproduct of wine production. After wine has been fermented and aged in barrels, it leaves behind a powdery substance. That substance is harvested and purified and sold as cream of tartar. It’s primarily an acid. In fact, it’s one of the powdery acids used in baking powder to help leaven products. It also helps strengthen the structure of egg whites so they don’t deflate so quickly which is very handy when making meringues.

It is not often called for in recipes, so it’s not typically a pantry staple unless you bake a lot. An acceptable substitution is 1 1/2 teaspoons of lemon juice or vinegar.

All of these products should be stored in their original containers in a cool, dry place - not over your stove. The heat and moisture from cooking could chemically alter them.

Back to Agent Articles