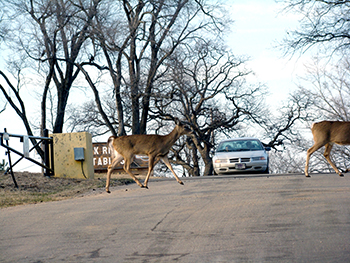 Have you been seeing more deer this fall? Or hearing about them in the news lately? At the peak of the breeding season it is not unusual to see deer at dusk, dawn or even throughout the day.

While the breeding season actually can run from October into January, the peak of the activity in the Kansas City area takes place from early November through the end of November. This increased deer activity can pose a problem for drivers in urban settings. According to the Insurance Institute for Highway Safety, an estimated 1.5 million deer-vehicle crashes occur each year in the United States. These crashes result in at least $1.1 billion in vehicle damage.

Tips for avoiding a fatal accident
What can you do to reduce your chances of being involved in a deer/vehicle accident?