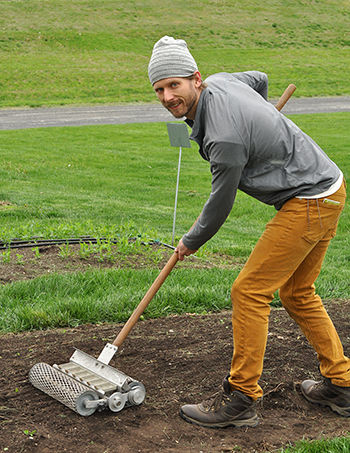 The global trend of revisiting “old-fashioned” techniques to enhance the sustainability of our economies, agriculture and diets has come to the small tool industry — especially those sold for farms and gardens.

The slow tools movement is taking design and manufacturing concepts of the past (i.e., small and/or local production, built by craftspeople, hand and horse powered implements) to improve efficiency in the small market farms and homestead gardens that have become increasingly popular.

Jack Algiere, farmer at Stone Barns Center in Hudson Valley, New York and trailblazer of their slow tools initiative says, “The problem is that there hasn’t been a set of tools for small-scale, diversified farms since 1940.” 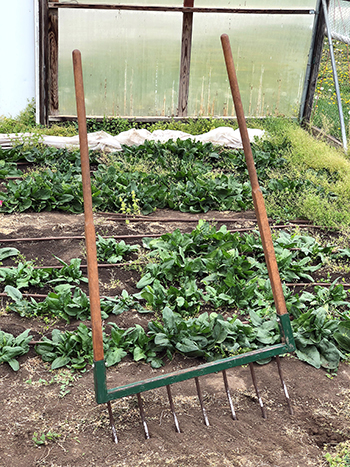 Take the broadfork, for example. It’s a wide garden fork with long tines capable of breaking up deep compaction and aerating a raised garden bed with just gentle rocking motion. It’s also known as the “manual tiller”, and it’s gone through a serious resurgence in the small farm community over the last few years. This heavy-duty hand tool had fallen out of usage in favor of gas powered cultivators. But with the growing consideration for life in our soil food web, like the larger beneficial worms and fungi which are unnecessarily disturbed by more modern machines, the broadfork is now being widely adopted by farmers and gardeners alike.

The adulation for slow tools has been in large part to rock-star farmers/authors/inventors like Eliot Colman and Jean Martin Fortier, who actually named his Quebec farm after the broadfork (Les Jardins de la Grelinette). And the success of their farming methods has motivated low-emission tools to be sought after more and more for their effectiveness, ergonomics, and ingenious simplicity.

If you want to learn more about the cutting edge and “old-timey” tools that are best suited to garden scale join this K-State’s Growing Growers workshop. This will include a field day at the Grown in Ivanhoe Market Gardens, in Kansas City, MO.

Participants will explore a vast array of farming equipment for small and medium-sized farms including those for field prep, planting, cultivation, harvesting, and overhead and drip irrigation systems. This workshop will help you put together a wish list of must-have tools; and provide a general overview of equipment maintenance, design and modification; as well as discuss big-picture infrastructure for productive farms and gardens.

This workshop will be hands-on and highlight the new community tool share program being offered by the Ivanhoe Neighborhood Council and Grown in Ivanhoe. Attendees will get a chance to operate some of the slow tools as presenters demonstrate how to turn over a spring crop, prepare beds and plant summer crops. The right tools can really make all the difference in successful farm and gardens.