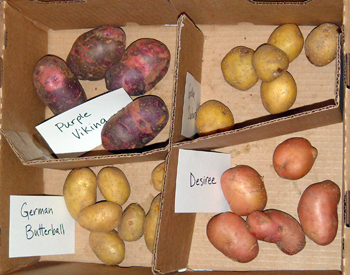 Mid-March brings about two great events: St. Patrick’s Day and potato planting time. Although March 17 is often thought to be the potato planting deadline, any time from mid- to late-March is fine.

Potato varieties
Be sure to buy seed potatoes rather than using those bought for cooking. Seed potatoes are certified disease free and have plenty of starch for quick sprout as quickly as soil temperatures allow.

Varieties differ in texture as well. The russet varieties are particularly good for baking as they have a mealy crumbly texture when baked. White or red varieties are usually preferred for boiling or mashing.

Cutting and preparing seed potatoes
Most seed potatoes can be cut into four pieces, though large potatoes may yield more pieces and smaller ones less. Each seed piece should be between 1.5 and 2 ounces to insure there is enough energy for germination. Each pound of potatoes should yield 8 to 10 seed pieces.

Cut the seed 2 to 3 days before planting so freshly cut surfaces have a chance to heal over forming a protective coating to prevent rotting. Storing the seed pieces in a warm, humid location will speed the process.

Spacing in the garden
Plant each seed piece about 1 to 2 inches deep and 8 to 12 inches apart in rows 3 feet apart. Potatoes require a minimum of six hours of direct sunlight daily to grow. Though it is important to plant potatoes in March, emergence is slow. As the potatoes grow, pull soil up to the base of the plants. New potatoes develop above the planted seed piece. This also protects the new potatoes from the sun. Exposed potatoes will turn green and produce a poisonous substance called solanine. 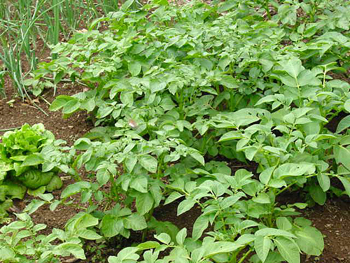 Potatoes develop along the main stem of the plant, above the seed piece. To encourage large yields and to prevent sunburning, potatoes should be hilled or ridged, pulling loose soil along the row as the crop is growing. This ridge or hill eventually should be 8 – 12 inches tall.

Potatoes like a fertile, well-drained location with loose, friable soil. Potatoes need regular consistent watering, especially during development when the plants are 6 – 12 inches tall. Irregular watering lowers yields and may result in rough knobs on the tubers. Mulches can be useful in holding moisture near the plant.

Care of the plants during the season is simple; control weeds, water regularly and fertilize lightly a couple of times. It is vital to grow the plants as fast as possible so the tubers will develop before the heat of summer. Potatoes can be dug once the vines begin to die down in early summer.

Harvesting
Early or new potatoes can be harvested as the plants are growing by gently removing some plants in the row. Begin digging potatoes when the vines are about half dead. Remove excess vines and carefully dig the tubers. Allow them to surface dry in the shade for a day or more to toughen the skin and prevent sunburning. Then move potatoes into a cold dark location for storage.

Enjoy, as home-grown potatoes have more flavor than any potato ever purchased at the grocery store.