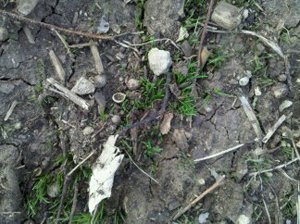 Each winter I am asked numerous times about planting grass seed during the dormant season. This is often referred to as winter or snow seeding. My experience and education have taught me that this is not a highly recommended practice for several reasons.

Research done at Kansas State University a few years ago has shown that dormant seeding may be a viable option. Keep in mind that fall seeding in September is the ideal time to establish a bluegrass or tall fescue lawn.

Dormant seeding is done during the winter when low temperatures prevent the seed from germinating until spring. This is generally during mid-November or on. One advantage of this procedure is to be able to seed during a less busy time of the year. Spring weather can be wet, which delays seeding. Late spring planted grass is prone to weed invasion and less able to withstand the stresses of summer.

What winter month is best for dormant seeding?
Researchers conducted a study to compare tall fescue planting from December through March. All of the seeding was done on the fifth of the month. The area was bare soil that had been tilled and prepared for planting.

The amount of germination and cover by the grass was recorded on April 15 and May 18 to determine the success of each seeding. The April rating showed the February planting to have the highest cover of grass at 73 percent. The other months had cover of less than 50 percent. The early plantings were less successful, probably due to birds feeding on the seed and on uneven moisture. March rated low, as the seedlings were less mature.

Ratings on May 18 showed no difference between the February and March planting with 80 percent of the soil covered by turf. These seedling stands were thick enough to prevent most crabgrass, and mature enough to withstand the summer conditions without supplemental watering.

Good soil contact with the seed is important for proper germination. Verticutting or core aeration is the common method of soil preparation during September. Dormant seeding relies more on Mother Nature. Ideally, plant the seed following a snowfall of at least one-half inch, or when there is ample soil moisture. The freezing and thawing of the soil help work the seed into the soil.

So for those of you with bare areas, timing the application of seed with either a winter rain or snowfall might be the ideal time to spread your grass in hopes of the winter conditions helping to fill in the bare areas. One last thought, dormant seeding is best done in small patches or areas of the lawn. Entire lawn renovation or seeding is best accomplished in September.