No insect is more recognizable in the landscape than the ladybug. They are a welcomed sight by gardeners for their ability to feed on aphids and other soft-bodied insects. Truly one of the good guys, ladybugs play an essential role in the world of insects.

In the reference book Insects in Kansas, it lists 7 species of ladybugs found across the state. Adult lady beetles have convex to oval-shaped bodies, which can be orange, yellow, red, pink or black with spots.

This bright coloration is used as a defense discouraging other predators from eating it. In addition, they protect themselves by giving off an odorous, noxious fluid seeping out of their joints.

A single ladybug can consume 5,000 aphids in its lifetime. Adults feed on aphids but mainly on the pollen of flowers. It’s the larval stage that consumes the most aphids. The larval stage looks nothing like the adult.The larvae are often described as having an alligator-like appearance. With spiney backs, they are about a half-inch long, narrow, and black with bright spots. 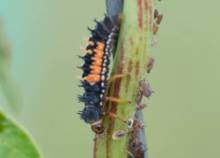 While looking dangerous to humans, they are quite harmless. Larva forage on plants in search of prey for a couple of weeks before pupating. Adults quickly move on as the food supply becomes scarce.

Since ladybugs are one of our best natural pest controls, care should be taken to encourage populations to build up in the garden.

Unfortunately, several gardening practices tend to decrease their population. Here are some tips to boost their numbers.

Learn to identify the different stages of development in addition to the adults. Yellow egg masses are laid on the underside of the leaf. Do not crush or remove.

Many people see the alligator-looking insect and reach for an insecticide or want to kill it. Although the strange-looking larvae appear harmful, they are beneficial.

Most importantly, limit or stop using insecticide applications, both chemical and organic. These products kill the good guys along with the bad guys. Using an insecticide can cause a boomerang effect resulting in a considerable outbreak of aphids as the natural predators have been killed off. Aphids reproduce faster than ladybugs.

Some people purchase and release ladybugs to control aphids. According to research from the University of California, this doesn’t work as you would imagine. Due to inadequate numbers, poor quality of ladybugs, and insufficient food, these releases fail to provide satisfactory control.

Packaged ladybugs deteriorate rapidly if not handled properly. The number of adults in a bag is not high enough to provide control. Local gardens usually don’t have enough aphids, so they fly away in a few days in search of food.

Studies found 95% of the released ladybugs flew away within 48 hours, and the remainder were gone in 4 to 5 days. Adults were highly unlikely to lay eggs. The larvae stage are the best feeders on aphids, not the adults.

Diversifying the landscape, limiting pesticide use, and encouraging a natural balance to keep the aphid population in check is your best defense. If there is an outbreak of aphids in your garden, be patient. Wait for the ladybugs to come instead of reaching for a spray, then let the feeding frenzy begin.