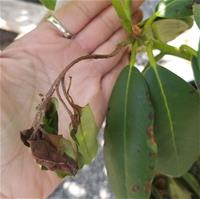 A disease has been found in Kansas with the potential to kill a number of our local native species including oak trees. The source of the disease is infected plants shipped from an Oklahoma nursery to sixty Walmart stores throughout the Kansas City area. The Kansas Department of Agriculture and K-State Extension made the announcement after samples tested positive on June 7, 2019.

Container-grown rhododendrons shipped to Walmart are the source of the pathogen Phytophythora ramorum. The disease is called Ramorum blight in landscape plants and Sudden Oak Death (SOD) in oak trees.

If you purchased any rhododendron plants from an area Walmart this spring, please take action immediately. All parts of the plants must be destroyed to prevent the spread of the disease. Dig up the plant, including the root ball and soil, and double bag it in plastic. Place in the garbage to be buried in the landfill. Even healthy looking plants should be removed as they are still carriers of the disease. Do not take the plants back to Walmart as this increases the chance of disease transmission. If seeking a refund, use your receipt instead of returning any plant material to the store.

Tools used to remove the plant, such as shovels, pruners, shoes, gloves or any other materials that may come in contact with the plants during the removal process should be sanitized to reduce the spread. Sanitize garden tools with either a ten percent bleach solution or thoroughly wiping down all surfaces with rubbing alcohol. Wash gloves and clothing as well.

Sudden Oak Death is not new to the United States. The disease has caused damage in susceptible trees for nearly fifteen years in California, Washington and Oregon. In Kansas and Missouri, this disease could spread quickly due to our moist weather patterns and increased number of native oak trees.

Ramorum blight can be difficult to identify as it has many symptoms based on the plant material and stage of development. Symptoms on the nursery plants include leaf spotting or browning and stem dieback. These symptoms are easily confused with common problems such as environmental stress and less damaging pest issues. Landscape shrubs rarely die from the disease but increase the spread. Symptoms in oak trees include bleeding cankers on the trunk, leading to decline and death.

The rainy weather makes our area favorable for disease development. Take action now if you purchased rhododendrons from Walmart this spring to remove and discard them immediately.