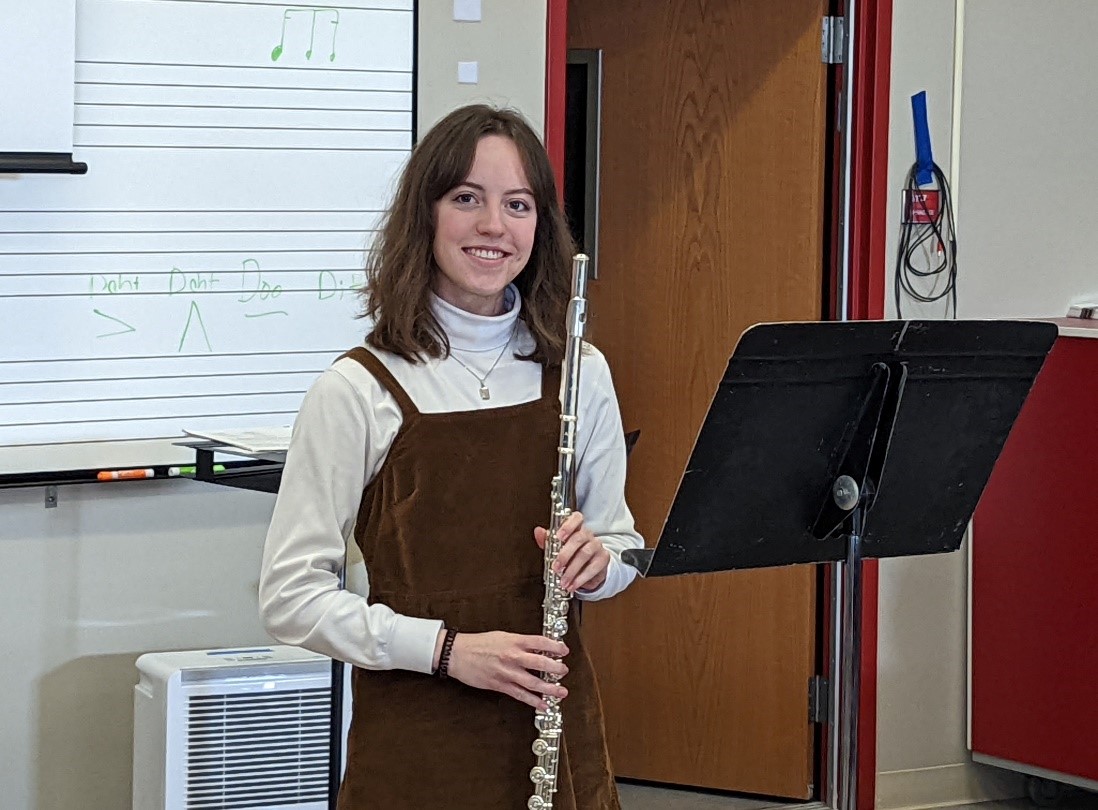 May 22 is National Buy an Instrument Day. Music means many things to different people. Music brings people together and creates a sense of community. National Buy a Musical Instrument Day urges us to purchase an instrument in celebration of every person’s ability to learn and play music.

Why is playing an instrument so important for youth? Playing an instrument is like a workout for the brain! It builds memory skills, improves coordination, teaches perseverance and resiliency, creates responsibility, supports self-expression, builds self-esteem, improves academic performance, exposes youth to cultural and historical diversity, and develops youths’ social skills.

Many Johnson County 4-H’ers excel at playing instruments in the performing arts project! We’d like to showcase a couple of them.

18-year-old Maddie A. has been a member of Lucky Clovers Club for 11 years. Maddie plays the flute, piccolo, and tenor saxophone and has been playing since she was in the 5th grade. She started playing instruments because she eventually wanted to play in band. She originally started with the flute because it was a family tradition. She moved onto piccolo for marching band and symphonic band in high school and just recently picked up tenor saxophone for jazz band. The thing she loves the most about playing an instrument is the competition. She loves challenging herself with new and different songs. She constantly tries to improve her skills by adding vibrato and double tonguing, which are both different techniques to create richer and more vibrant sounds from your instrument.

17-year-old Becca A. is a seven-year member of the Great Plains Club. Becca plays viola and piano and sings in choir as well. Becca’s journey with instruments began when she was six-years-old after a long-standing history of her siblings playing instruments and singing in choir. What makes Becca stand out from her siblings however is that she intentionally chose a non-mainstream instrument, the viola.

She explains that what she enjoys the most about playing an instrument is that it provides a creative release from everyday life. She participates in many extracurricular activities and while each helps in its own way to relieve stress, music has its own way of working the brain, but remains separate from pressing stresses.

Of course learning how to play an instrument comes with challenges, but one that both 4-H’ers seem to tackle well! Maddie explains that the most challenging part is the transition between playing three different instruments because the embouchure, or mouth placement is different for all of them. It can be difficult to pay attention to the tempo, rhythm, key all at once. Also, it’s sometimes difficult for her to find time to practice between school and work. Becca explains that her challenges are more related to working around the theory portion and physical practice. The part she struggles with the most is just letting go enough to be confident in her abilities and making music instead of simply memorizing notes.

According to Becca, growing up in a musical family helped in the beginning by observing her older siblings and relatives enjoying music and playing instruments. Now, she realizes that not everyone gets the opportunity or sees the purpose of a foundation in any kind of arts. Although her personal experiences helped her see what was normal to her family as a young child, she now recognizes the gift of music to a greater degree after researching the effects of music on the brain. Not only does music aid those with dementia to briefly remember lost memories, but it helps any average person on a scientific level. More than just physical, music helps a person build a routine and follow a passion. Like many adventures throughout life, playing an instrument can turn into a short hobby. With work and years of dedication, music can turn into a staple of life. Many children and adults alike are able to pour their emotions into a piece without having to utter a word. Because of this, music can become a natural release and therapy.

Thank you to Becca A. and Maddie A., Johnson County 4-H’ers, for their honest and insightful input!