Clay Soil: It shrinks and swells 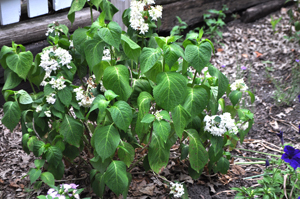 Once again the Kansas City weather has lived up to the reputation we all joke about; give it a day and it will change. We started off this year with above- average temperatures and below-normal rainfall. Then it switched to just the opposite. Now, in the last week or so, it has turned dry and hot. Our poor plants don’t know what to expect.

These hot, sunny days have left plants wilted. And now the soil has cracks that seem to have appeared overnight.

Plants wilt rapidly under the heat because their root systems are shallow. Ample to excess moisture tends to encourage root development close to the soil surface. These shallow roots don’t really need to work for moisture. As a result, as soon as the upper couple of inches dry out the roots don’t have access to the moisture deeper down in the soil — six or more inches.

Another reason for the quick wilting is the amount of leaf growth. The wonderful growing conditions in 2015 and spring conditions in 2016 have led to lush growth. Leaves are bigger and leaf canopies thicker and fuller. The result means more foliage surface area requiring more moisture to support the plant. The combination of shallow roots and a large transpiration area shows up as wilting. You may have noticed that during the heat of the day the plant is wilted, but come morning it has perked back up. This is because the plant was able to replenish the water back into the foliage. If it hasn’t perked up by the morning then it is definitely time to water, as the roots cannot access water. 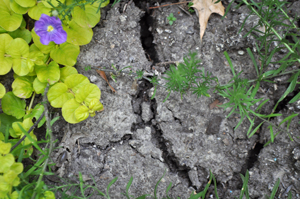 During these quick climate transitions you may have noticed cracks suddenly in the soil. Almost overnight soil cracks appeared in my lawn and garden. The cracks in the soil are directly related to soil moisture and the materials that make up our soils.

Local soils tend to have very-high clay content. Clay is a soil component that goes from one extreme to the other. During periods of heavy rain, clay holds a large amount of water in its small pore space between particles. Saturated clay soils hold so much water the oxygen is excluded. We often say the plant drowned out from all the rain. But in reality the plant suffocated from lack of oxygen to the roots.

Damage potential beyond the garden
It is this capacity that creates issues beyond the garden. Foundations of homes are affected by the pressure that is exerted as the clay shrinks and swells. This pressure is great enough to crack foundations and basement walls, and move concrete sidewalks.

This is why during periods of drought you will hear recommendations to water the soil a foot or two around the home. This additional moisture prevents the shrinking that, at some point, will swell again and place pressure on the foundation.

In the garden we reduce the shrink-swell capacity by adding organic matter to decrease the attraction clay particles have on each other. But never add soil around the foundation to fill in the cracks. Added soil will result in more pressure being placed on the foundation as the clay expands, resulting in increased damage. It may not be time yet to start watering the foundation around the home. But a few more weeks of heat and drought will change things, and watering will be highly recommended to protect your home.

The worst part of all this is summer has just arrived, and the hottest and driest part, the so called dog-days of July and August, are still ahead of us. If we only knew what to expect…cool, wet or desert-like? It sure would be nice to predict the weather, but since we don’t have a clue what will happen over the next few months we just have to take a wait-and-see approach and roll with the ups and downs. One more note; don’t twist an ankle in the cracks.